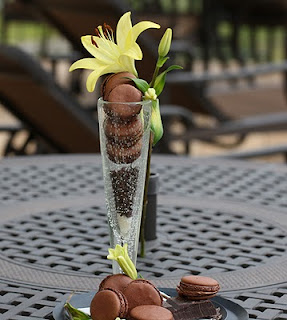 This past Monday I worked on a chocolate macaron, I wanted to create a recipe for a macaron that would satisfy the most “die hard” chocoholics. I believe I did, since everyone who takes a bite stops what they are doing and proclaims “wow!”
Since I always flavor my macaron shells, chocolate was the naturally progression, most people love chocolate.

At first I was hesitant, I had heard from many sources, chocolate macarons were hard to make correctly. My husband and daughter are both chocoholics and really wanted me to at least try. I started with an Italian meringue and went from there.

I ended up using two different types of chocolate just to have a smooth shiny macaron. I was a little more gingerly with the macarronage, I needed the batter to remain stiff so when the chocolate melted in the warm oven I would not end up with a mess.
I anxiously awaited, with the oven light on, for little crinkly feet. If I had figured this one out on my first try it would be a miracle. Generally I am like a “mad scientist” in the kitchen and work a recipe at least three times before I like the result.
To my delight and amazement feet started to appear after 2.5 minutes, well I knew I had succeeded in making a macaron, but taste. Now I needed to wait till the next day.
While the rest of the macaron trays baked Sydney and I started to work on the filling, this could be no ordinary filling either. I need a chocolate ganache that would stop traffic, and I had a ton of egg yolks left.
I made a Fudge Ganache (they were going to be Triple Chocolate Macarons) with two separate liqueurs and a Swiss Strawberry Butter Cream filling, I needed to cut some of the chocolate.
When the cookies cooled We matched the sizes up and began an assembly line of piping, putting tops on, and storing in an air tight container. The macarons then went for a long sleep, 24 hours, in the refrigerator  and I prepared a banana pudding mousse with the rest of the egg yolks (I still had some left.)
All night long I tried not to obsess about the little chocolate bundles in the refrigerator, but when the morning sun arouse I ran to the back refrigerator  grab three macarons, one for my husband, Sydney, and of course myself. Before either my husband or daughter could open both eyes I was handing them cookies. They both knew better than to say no, and each took a bite. Neither of them said a word, panic, “oh no” went through my mind. With in another minute wide four wide eyes were looking at me and finally both proclaimed WOW! 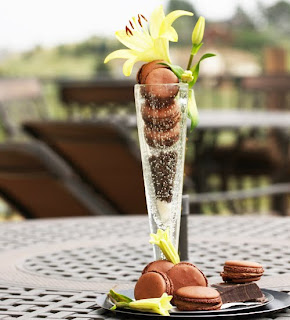 I had done it, my idea work!

Now I need to work on a sour cherry shell.