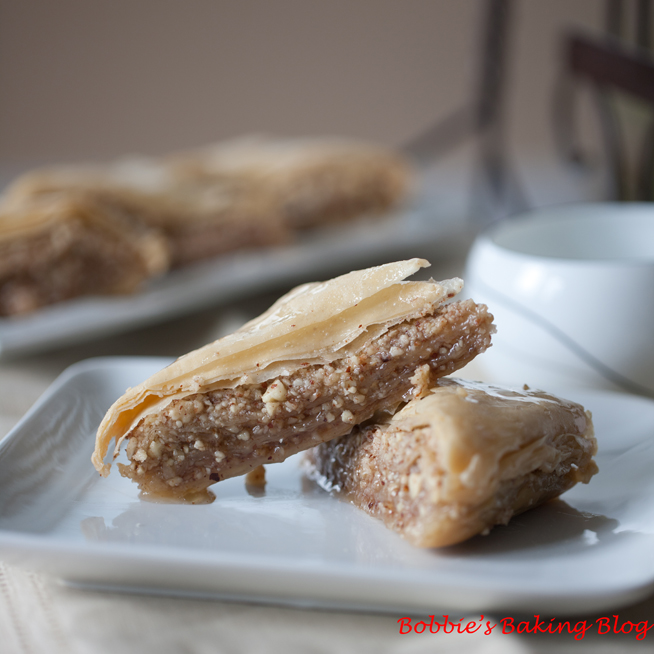 The dough works just as well for strudels

A close friend of mine, who moved to Colorado from New York and grew up in Greece, asked me if I could bake him Baklava. “Of course” was my answer. Inquisitively I wondered why he could not go to any bakery and buy some, when I asked he proudly exclaimed his grandmother had always used homemade phyllo dough, which he was unable to find in Colorado. When he resided in New York almost all the Greek and Turkish bakeries composed their own dough.

He has been so wonderful to both Sydney and I we decided to grant his request. 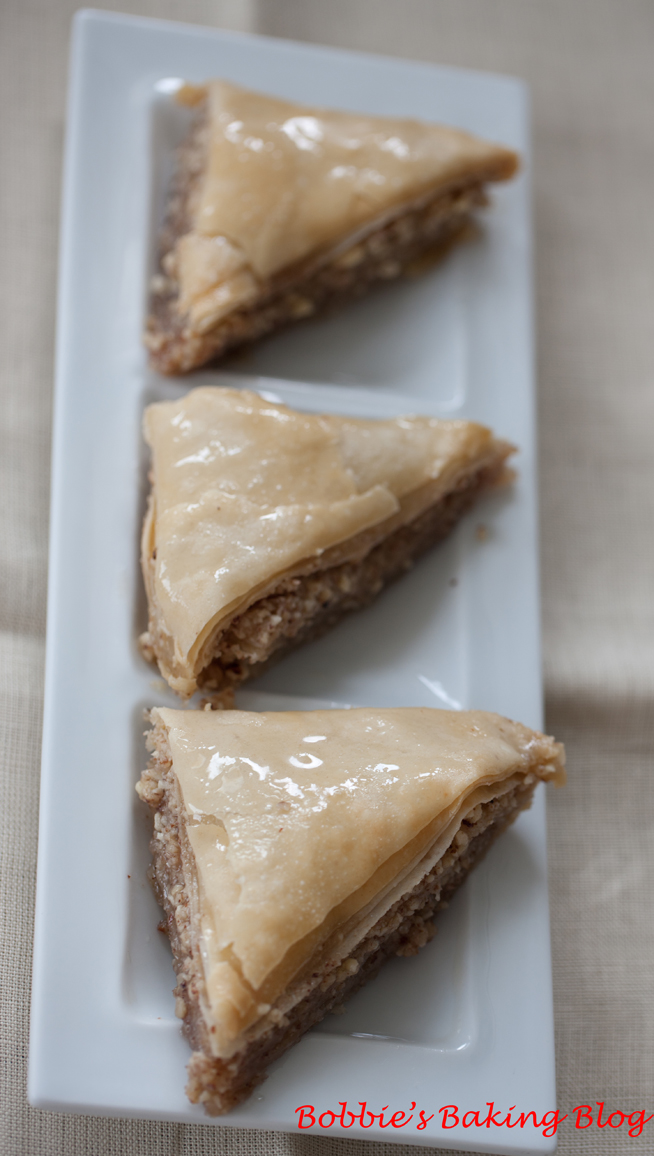 The syrup gives a shiny effect

I must admit I have limited experiences with homemade phyllo dough. After asking some important information and discovering he didn’t favor the traditionally nuts, Sydney and I went on a phyllo dough educational journey. I was quite astonished to learn phyllo dough has a rich background. Interesting enough Austria, Greece, Turkey, and Central Asia all lay claim to discovering phyllo dough; although each culture prepares the dough similarly. Coincidently I realized as we worked and began to create our own version of phyllo dough, it resembled Pâte Feuilletee (puff pastry) without the lamination process. In fact butter or beurre is not a component in the structure of the dough; however layers of melted butter is necessary  for lining the delicate layers of phyllo dough. There is a butter free version, but I will save that recipe for another day. 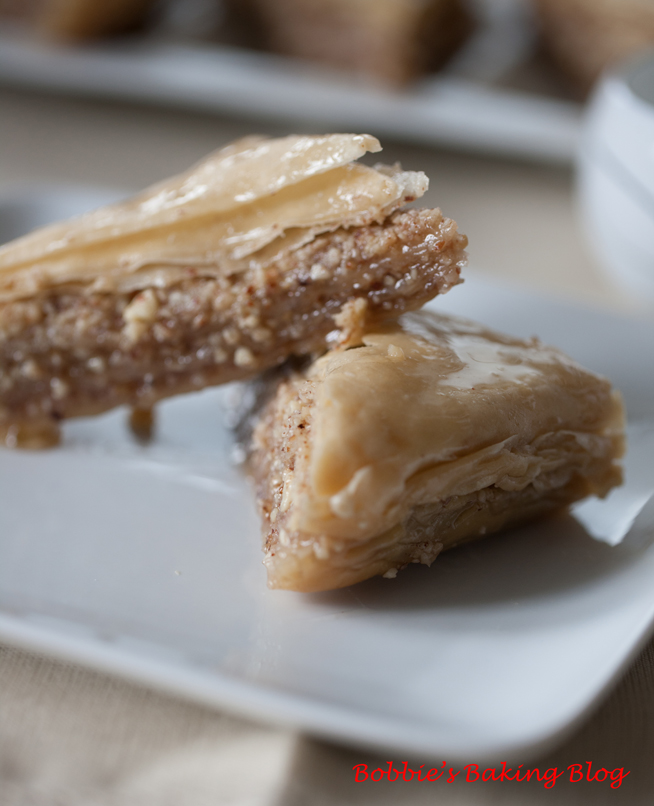 Though phyllo dough is not difficult to create, it does require patience, and a tender hand or hands. To create the delicate layers

Sift bread flour, all purpose flour, and salt. Set aside. 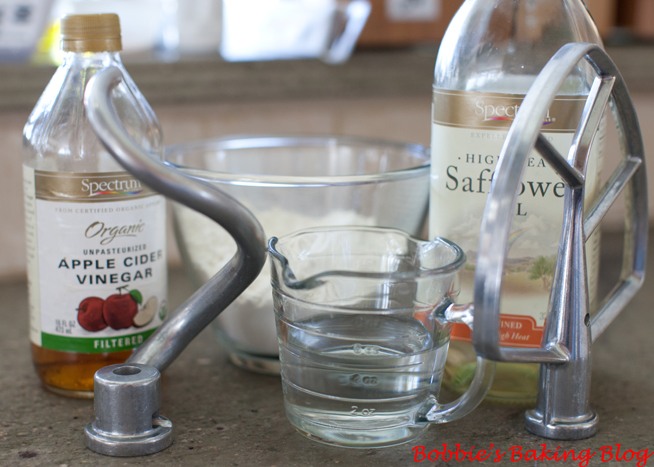 In the bowl of a standing mixer, with paddle attachment, place the sifted flour mixture beat on low for 1 minute.

In a measuring jug add the water, oil, and vinegar. With the mixer on low speed pour the water mixture to the flour mixture. Turn the mixer off and change to the dough hook, allow the dough to knead on medium speed until the sides of the bowl are clean. Make sure the dough is not too dry, add a little more water ½ teaspoon at a time.

Remove the dough, begin to knead on an unfloured work surface for about 2 minutes or until it has a satin finish. Pick the dough up about two times and throw it down hard onto the work surface, to remove any air bubbles.

Shape the dough into a ball, oil the top of the ball lightly, and cover the dough ball with plastic film tightly. Allow the dough to rest for 30 to 90 minutes, the longer the better.

If you find too many holes during the pulling process, knead back into ball and allow the dough to relax

Rolling out the dough:

Brush the center of a baking sheet with a little of the clarified butter, set aside. The best and most efficient way to roll and stretch the dough is on a table about 90cm/ 36-inches, so you can walk around as you pull and stretch. A folding card table is perfect. Cover the table with a cloth tablecloth with a fair amount of flour, using your rolling pin or the palm of your hands roll the flour onto the tablecloth. Begin by rolling the Phyllo dough to a 10-inch round circle. Once the dough is about 10-inch round slip your hands palms down, underneath the dough, use your knuckles to help gently stretch the dough, allowing the dough to drape, using natures gravity to slightly stretch it all the way around.  Once the dough becomes too large to handle place it on the card table. Leave the thicker edge of dough to over the edges of the table (anchoring it). Concentrating on the middle of the dough slip you hands between the tabletop and the dough, knuckle side-up. Stretch and pull the dough until it’s about 2 feet (60 cm) wide and 3 feet (90 cm) long, it will be tissue-thin by this time.

Cut away the thick dough, with scissors around the edges. The dough is now ready to be cut.

In a small bowl whisk the oil, and water. Create a well in the center of flour mixture and pour the liquid ingredients in the well. Using a fork, work the flour mixture into the water mixture, scraping it in from the sides of the well to the center, turning the bowl as you go. The mixture will seem paste like at first; it will turn to a dough as you work it.

The fork will no longer be useful, but it is now time for your hands to start working, work and turn the flour into a dough. On a lightly floured work surface place the dough and begin to knead for about 10 minutes. The dough will be sticky at first, do not add flour to your hands, and just keep rubbing the dough. Pressing toward you and down. Once the dough is smooth, satiny, and elastic shape into a ball.

Oil the top of dough ball, cover with plastic film, tightly, and rest for 30 to 90 minutes. 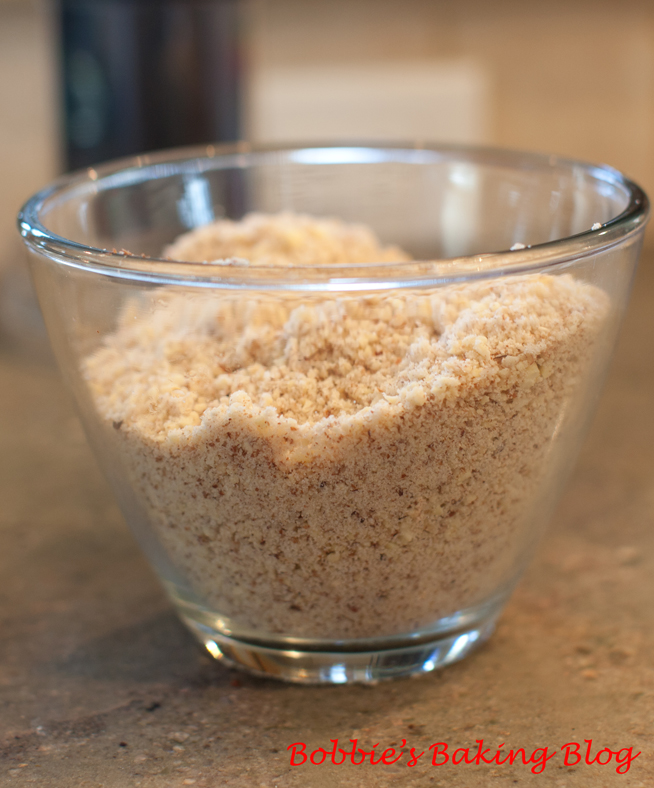 We used pecans, almonds, and hazelnuts

In a food processor, with a steel blade grind all the nuts together until they are about pea size, add the cinnamon, and sugar; pulse to combine, set aside. Once the nut mixture has been ground begin pulling the phyllo dough (as explained above), prior to unwrapping the dough inhale for ten seconds and exhale. You are know relaxed and ready to begin.

A few small holes are fine, but if the dough becomes large or abundant began again. 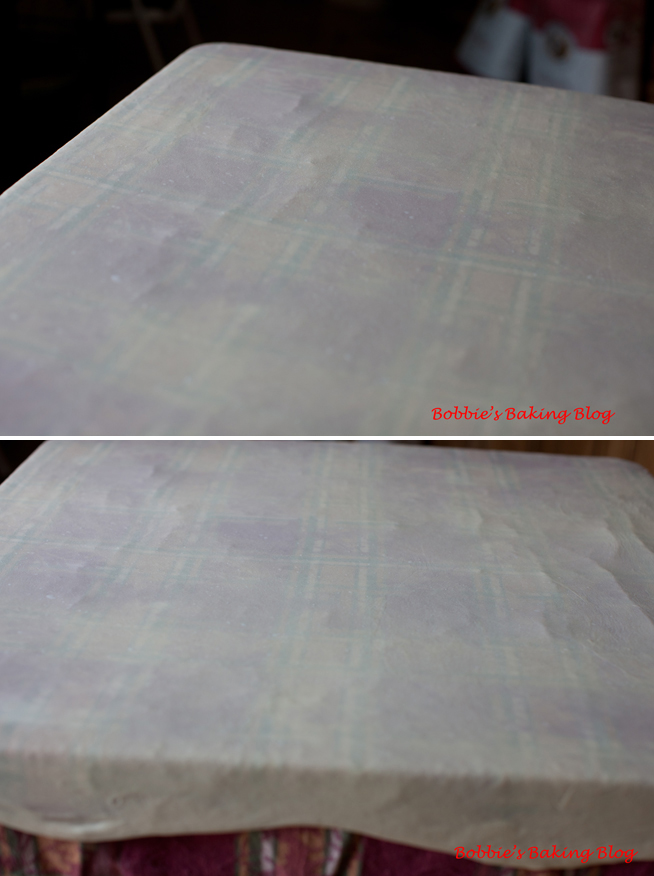 The dough should be very transparent and thin

The easiest and most efficient method Sydney and I found for cutting and layering the baklava is to cut the dough directly on the card table using a pizza cutter and a food safe measuring tape. Since our pan was an 20.32 x 20.32 cm/ 8×8-inch square pan, we cut the dough into 20.32 x20.32/ 8 x8-inch squares. With the melted clarified butter brush the pan and layer one square at a time, buttering each square gently with the melted clarified butter, once there are four sheets layered sprinkle the nut mixture generously with the nut mixture.

Begin the same process of layering four more sheets and then adding the nut mixture until you have reached the top, ending with four buttered layers. 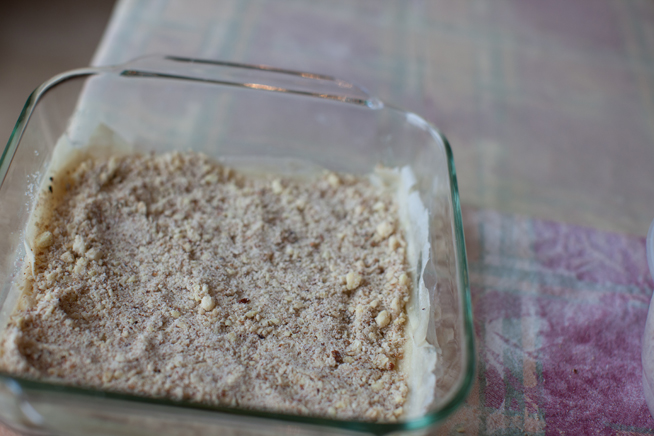 Score the finished raw layered baklava into triangles or a diamond pattern with a very sharp knife, place the pan into the oven, and bake for 30 to 40 minutes or until the top is lightly golden brown. 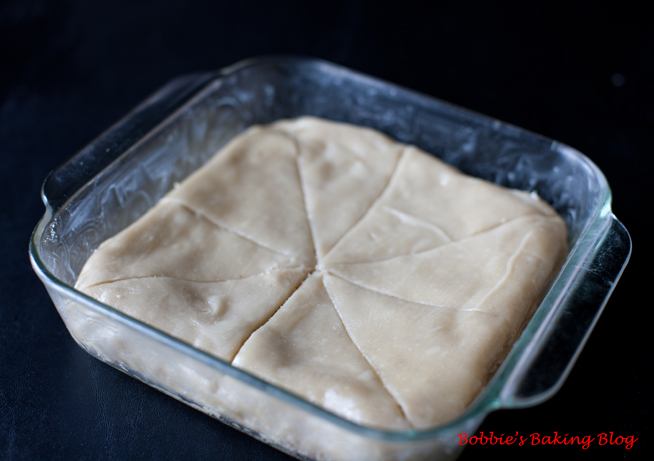 While the baklava is baking in the oven begin the syrup top.

In a heavy saucepan place all the ingredients, stir just until the sugar is fully moistened. Bring the syrup to a simmer over medium to medium-high heat, stirring occasionally. Reduce the heat to medium-low and cook until the syrup is slightly thickened, about 10 minutes.

Remove the syrup from the heat, strain, pour the into a glass measuring jug, cover to keep warm. Set aside till the baklava is finished baking.

While the baklava is still warm cut once again, following the cut lines already in place. Pour the syrup over the warm and cut baklava, leave uncovered for least 6-hours to absorb all the syrup.

Store the left over baklava (if there are leftovers) up to 1 week. 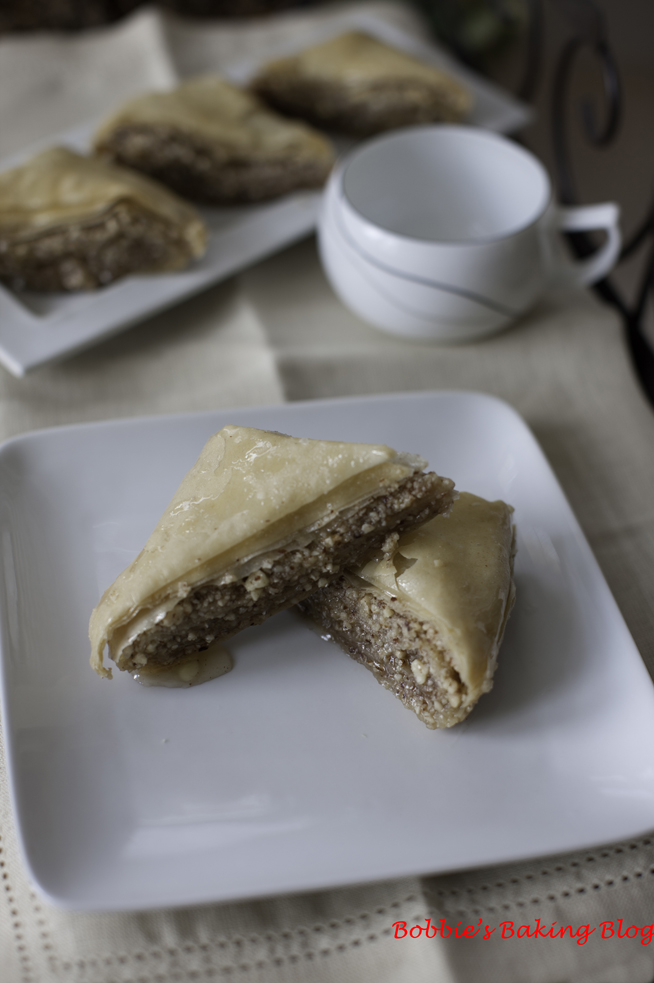